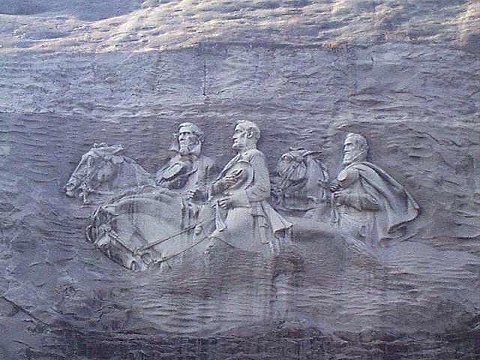 Call to Action!
Write the Stone Mountain Memorial Association
to Stop the Changes Proposed by the NAACP

On Monday, September 14, I, along with several other compatriots, attended a meeting of the Stone Mountain Memorial Association (SMMA). The SMMA is the authority charged with the maintenance and preservation of the Memorial carving and the Park. As you probably all know, it is intended to be a memorial to the Confederacy.

O.C.G.A. § 12-3-192.1 states:
• The purposes of the Stone Mountain Memorial Association shall include:
1. To preserve the natural areas situated within the Stone Mountain Park area;
2. To provide access to Stone Mountain for Georgia’s citizens; and
3. To maintain an appropriate and suitable memorial for the Confederacy.

Present at the meeting were members of the National Association for the Advancement of Colored People (NAACP) and the Stone Mountain Action Coalition (SMAC). The SMAC is the real driving force behind this particular meeting and architect of the ongoing push to change the Park from a Confederate memorial to a Social Justice Playground. The representatives of the NAACP made the usual flannel mouthed objections which any Compatriot could guess: racism, slavery and the Klan.

The SMAC representatives were far more sophisticated and far more dangerous. Check their website out for a sample:
stonemountainaction.org

Without reciting all their arguments, it is safe to say that they are a kinder, gentler Taliban.

WHAT CAN YOU DO?
All supporters of Southern Heritage need to immediately send a letter to the Chairman of the Stone Mountain Memorial Association at this address:

We have friends on the SMMA and we need to show that the people of Georgia are not in favor of the remaking of the Confederate Memorial at Stone Mountain into yet another Social Justice memorial.

When you write, do not say you are a member of the Sons of Confederate Veterans. Do not go into a lengthy essay about true causes of the War. A short letter saying something about how much you have enjoyed visiting Stone Mountain and that you do not want anything to change. You could say that you are not offended by the Confederate Memorial or the use of Confederate names and display of Confederate flags.

I do not want this to look like a campaign but rather a spontaneous movement of the people themselves.

Please do not view it as an opportunity to educate the members of the Board. A simple one page letter should do.

Will you take ten minutes out of your day and send this personal letter? Will you do it now for those ancestors who walked barefoot in the snows and slept under the skies so that you, their descendants, could have an independent Southern Republic? Surely this is not asking too much.

When you finish reading this call to action, please act. Act now. Do not put it off.