Many of you may have heard that Governor Brian Kemp appointed Rev. Abraham Mosley, a well-known community advocate from Athens as chairman of the Stone Mountain Memorial Association (SMMA). The below AJC article quotes Kemp telling Mosley “to follow his moral compass while considering such changes” which could be put on the table as soon as next week at the Monday, April 26 SMMA board meeting. Mosley is quoted as saying ” he plans to take a measured approach but will do all he can “to move the ball forward.”

The jargon being used by the Governor and Rev. Mosley strongly implies that they will be looking favorably on a politically correct agenda being foisted on the citizens of Georgia in contravention of the Georgia law. We were also promised that by giving up the Confederate battle emblem on the State flag Georgians’ Confederate Memorial at Stone Mountain would be protected forever.

At the April 26th meeting, Bill Stephens CEO of the SMMA is planning to introduce some proposed changes and additions to Stone Mountain, that I am sure we will not be in favor of.

We need to flood the meeting room with our members and supporters. I ask all members that are able to come to the SMMA meeting on Monday, April 26 at 1:00 pm to get on the list to speak to the Board against any changes to Stone Mountain.

The rule is to be precise and polite. This will not be a protest it is to show your support against changes to Stone Mountain.

I will be there to present the Georgia Division, SCV written proposal to the SMMA to implement Heritage Tourism at the Park with living history presentations and more War Between the State Attractions and Events.

The meeting on April 26, at 1:00 pm at the Evergreen Conference Center in Salon A-D. The address is:

We need to send Governor Brian Kemp letters, emails, and phone calls to his office immediately.

Let him know you have been a supporter of his and you are disappointed with his appointment of a “Community Activist” as Chairman of the SMMA who committed to change Stone Mountain Park. That he needs to quit pandering to the woke mob and protect Georgia’s History and Heritage, leave Stone Mountain Memorial Park alone. That is an important issue with you, your family, and friend and could strongly influence your vote in 2022. 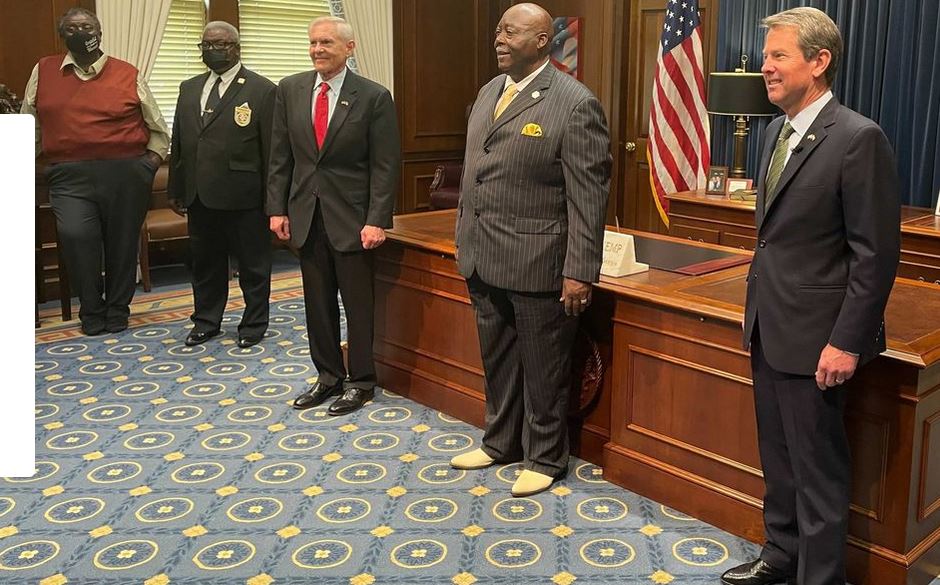 Kemp taps first Black chairman of Stone Mountain Memorial Association
By Tyler Estep – The Atlanta Journal-Constitution
Greg Bluestein – The Atlanta Journal-Constitution
Rev. Abraham Mosley stresses patience in addressing park’s Confederate imagery
An African-American man will lead the board that decides how Stone Mountain Park — and the world’s largest Confederate monument — move into the future.
The Rev. Abraham Mosley, a well-known community advocate and pastor from Athens, was quietly sworn in this week as the new chairman of the Stone Mountain Memorial Association’s board of directors. He becomes the first Black person to hold the position in the state authority’s more than six-decade history.
Gov. Brian Kemp appointed Mosley at a time when systemic racism and Civil War monuments are at the forefront of the national discourse, and when calls for change to Stone Mountain Park’s ubiquitous Confederate imagery are at a fever pitch.
As he made things official during a small Tuesday morning ceremony, the governor charged Mosley to follow his moral compass while considering such changes — which could be put on the table as soon as next week.
Mosley, who has pastored Athens’ Mount Pleasant Baptist Church since 1974, said he plans to take a measured approach but will do all he can “to move the ball forward.”
“Certainly, there are mounting problems that have been brought before us. But we’ve got to handle them one at a time,” Mosley said. “We’ve got to be patient. I don’t want to be the man who prayed, ‘Lord, give me patience, but give it to me right now.’”
In addition to the massive mountainside carving of Jefferson Davis, Stonewall Jackson and Robert E. Lee, Stone Mountain Park is home to streets, buildings, flags and many other smaller attractions that pay tribute to the Confederacy. The mountain was also the birthplace of the second Ku Klux Klan.
Demands for change are nothing new.
But last summer’s nationwide protests over police killings of Black men and systemic racism — as well as white supremacists, militia groups and others frequently using the mountain as a rallying point — reignited the debate.
A grassroots group called the Stone Mountain Action Coalition has for months pushed for a comprehensive transformation of the park to make it more welcoming to diverse visitors.
The group said this week it was encouraged by Mosley’s appointment.
“It is our hope,” the group said in an emailed statement, “that the appointment … is the first of many changes at this public park that will result in the immediate and complete removal of symbols, monuments, flags, street, place and building names, events and activities that honor and celebrate the Confederacy and the Ku Klux Klan.”
Georgia law mandates that the memorial association maintain a tribute to the Confederacy at Stone Mountain Park, and otherwise makes it difficult to remove or alter such monuments. Memorial association leaders, including now-former board chair Ray Stallings Smith III, have long been resistant to any significant modifications.
That could be changing.
The memorial association board hasn’t met since November, when it tasked CEO Bill Stephens with exploring options that would “bring Stone Mountain Park into the 21st century.”
The board is now scheduled to meet Monday afternoon. A recently posted agenda for the meeting includes time for Stephens to deliver “remarks and [a] presentation.”
Few specifics have been confirmed publicly, but state Rep. Billy Mitchell, a Democrat whose district includes Stone Mountain Park, said he expects “some of their goals and some of their aspirations” to be outlined during the meeting.
“Reverend Mosley is a good man who is not afraid to take on challenging situations,” Stephens said in a statement provided to the AJC. “The decisions made in the next few months are crucial to the future of the park. We look forward to working with him as we take on the hard issues and tough choices ahead.”
Any proposals brought forth by Stephens would require approval by the full board.
DeKalb County CEO Michael Thurmond was appointed to the memorial association’s board in 2017. He left after about a year but, as a native of Athens, has known Mosley for more than four decades.
Thurmond said he has “great confidence” in Mosley as a person, and is hopeful that his appointment “is a signal that the governor and the board is ready to move in a more inclusive direction.”
At the same time, Thurmond was disappointed that another memorial association board member — Gregory Levett Sr., the well-known funeral home operator across metro Atlanta — was denied another term.
Levett had been the most outspoken supporter of changes at Stone Mountain Park and backed many of the proposals brought forth by the Stone Mountain Action Coalition. He told the AJC that he believes that was “100%” what precipitated the call last week telling him his services were no longer needed.
Levett is Black as is his replacement, East Metro CID executive director Christopher Sanders. The latter was sworn in alongside Mosley on Tuesday.
“He’s going to need the board of directors’ support,” Levett said of the new chair. “He can’t do nothing if they don’t support him. And if they keep that same attitude, nothing’s going to change.”
Kemp, meanwhile, said Mosley would “bring a lot of cohesion to the association and, really, to the state.”
“It’s important that we really look to our future and move forward in the right way,” the governor said. “And he’ll be the right leader to do that.”
The conversation over Confederate imagery at Stone Mountain Park reignited last summer amid protests over systemic racism and police killings of Black Americans. Activists have pushed the Stone Mountain Memorial Association to make dramatic changes at the park, including changing street names, removing Confederate flags and addressing the massive mountainside carving of Jefferson Davis, Stonewall Jackson and Robert E. Lee.
Officials previously said “additions” are more likely than subtractions, but significant proposals could be revealed at the memorial association’s April 26 meeting.
Barry Colbaugh2021-04-23T21:41:20+00:00Featured Story, GA Division News|