On June 30, 2020, The Rockdale County Commissioner Chairman Oz Nesbitt Sr. violated Georgia State Law 50-3-1 by making an “executive decision” to remove the Rockdale County’s Confederate Veterans’ Monument from the Rockdale County Courthouse grounds.
On July 7, 2020, The Georgia Division Sons of Confederate Veterans filed lawsuit and a request for a Temporary Restraining Order naming Oz Nesbitt as defendant for violation of Official Code of Georgia Annotated § 50-3-1.
On October 16, 2020 Rockdale County Superior Court Chief Judge David B. Irwin issued an order dismissing the lawsuit. The Judge ruled that Chairman Oz Nesbitt was protected by “sovereign immunity” at both at personal level and as Chairman of Rockdale County Commission. The Judge also held that the Georgia Division lacked standing to bring the suit.
On November 11, 2020 the Georgia Division, Sons of Confederate Veterans filed a notice of appeal with the Georgia Court of Appeals against this Order.
The monument honoring the Confederate veterans was located on Main Street between Court and Milstead Avenue next to the old Rockdale County Courthouse. The Monument was erected in 1913 to commemorate the Confederate dead in the Southern War for Independence (1861-1865). On top of the Monument is a soldier standing at rest. On the base of the Monument is inscribed:
TO THE CONFEDERATE VETERANS
OF ROCKDALE COUNTY.
MANY OF WHOM GAVE ALL,
ALL OF WHOM GAVE MUCH.
The Monument has been removed from the position of honor it had enjoyed since 1913 and is presently stored at an undisclosed location. Chairman Nesbit sought to place it in a cemetery. Such placement is expressly forbidden by Georgia law. 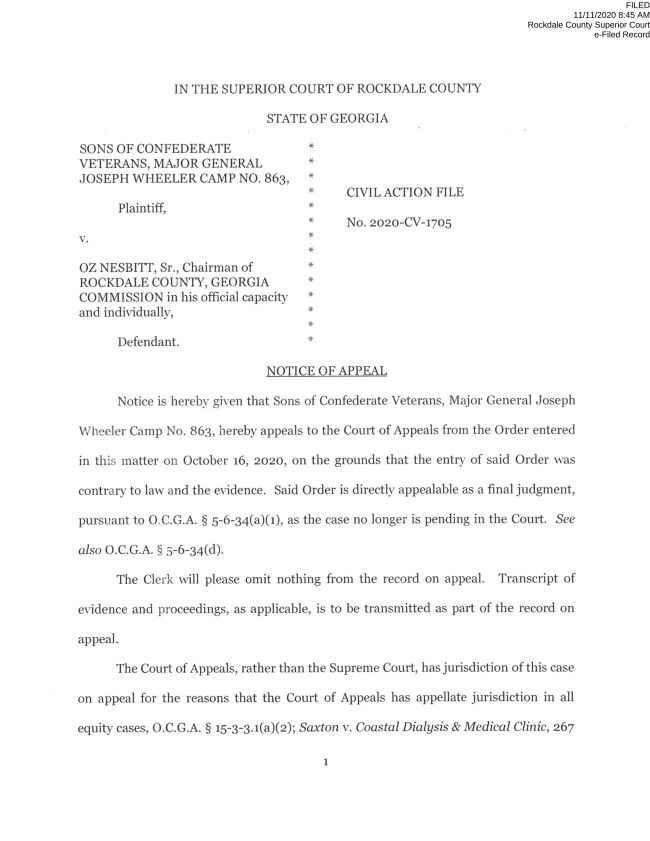