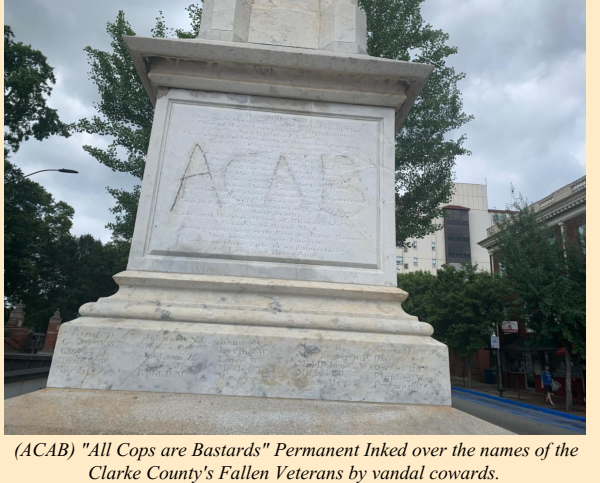 After an unsuccessful attempt to reach common ground with Mayor Kelly Girtz  of the Athens-Clarke County Consolidated Government (ACC), t he Sons of Confederate Veterans (SCV) was left no other option but to file a Temporary Restraining Order (TRO) and Complaint against the ACC with the Superior Court of Clarke County to forestall a violation of Official Code of Georgia Annotated § 50-3-1 by removing the Monument to the dead soldiers of Clarke County and placing it off a highway on a battlefield largely unknown and unvisited. The Georgia law requires that if moved, the Monument must be placed in a position of equal prominence. The prospective site is, obviously, a concealment of this memorial to the Clarke County dead. It was evident to the SCV that the Mayor’s and Council’s claims that the Veterans’ Monument was structural unstable and was a safety concern was nothing more than a ruse to remove and conceal the Monument to an obscure location. The SCV’s offer to pay for stabilization of the Monument at its present location was refused. Sons of Confederate Veterans condemns in the strongest terms possible the vandalism, removal and defacement of any Veteran’s monuments, memorials, or grave markers and will assist law enforcement in any way possible to vigorously pursue the prosecution of these heinous violations to the fullest extent of the law.

The Monument was erected in 1871 by the Ladies Memorial Association to commemorate the Confederate dead in the Southern War for Independence (1861-1865). The text of the marker was composed by Reverend Andrew Lipscomb, President of the University of Georgia. The shaft preserves the names of nearly 200 Athenians and Clarke County residents who made that final
sacrifice during the war. It was one of the first monuments to the Confederate dead erected after the
Southern War for Independence. For further information contact: