It was in 1912, a monument was erected to the Confederate Soldiers of Baldwin County and Milledgeville, Georgia The monument was first located at the intersection of Hancock and Wilkinson Streets, across from the Courthouse and Post Office. It was later moved, across from the Georgia Military College. Because he was moved to Jefferson Street the soldier statue was affectionately named Ole Jeff. Written on the outside of the monument is the following:

This tribute to the
memory of the
Confederate Soldier,
unveiled April 26, 1912.
His heroism, in the
presence of the
conquering foe was
equaled only by
his generosity to his
fallen enemy.
1861   1865

To the memory of the
Confederate soldier;
whose fame is as imperish-
able as the everlasting hills;
whose courage is unrivalled
since the dawn of civiliza-
tion; whose name shines in
undying glory on the pages
of history;

This monument is lovingly
erected by the
Robt. E. Lee Chapter
Daughters of the Confederacy,
of Milledgeville Georgia.

In August 2016,  Ole Jeff was damaged by an errant driver.  The driver of the car claimed her accelerator got stuck while she was turning onto South Jefferson Street. This was not considered vandalism although a great deal of damage was done. The Robert E. Lee Chapter of the UDC began searching for funds to restore the monument and with help of the local Old Capitol Camp #688 Sons of Confederate Veterans. With the Georgia Civil War Commission and the Georgia Division Sons of Confederate Veterans, over $8,000 dollars was raised along with money from the vehicle insurance company to restore the monument. An Elberton Georgia company completed the restoration work. Five years later the monument will finally be restored. The Georgia Division Sons of Confederate Veterans has been committed to restoring monuments throughout the State. On January 19, 2020, the Milledgeville Confederate Memorial Service will be at 1:30 pm. at the Confederate Monument in front of the Old Georgia State House at the corner of South Jefferson Street and East Greene Street. The public is welcome to attend. Come out and support Ole Jeff. 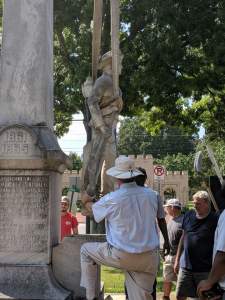