Our featured member spotlight today is on Randy Vaughn, Randy joined the State of Dade Camp # 707 in Trenton Georgia. He served as the Camps Adjutant. Randy joined the Sons of Confederate Veterans under his ancestor  Pvt Thomas Marion Young 1st Arkansas Infantry Co. K.  Randy is also a member of the Mechanized Cavalry and is serving as Corporal of SCVMC Ga. 3B Troop 1I.  We are proud of our Mechanized Cavalry as they have the ability of getting to any situation firstest with the mostest.  Randy has been active throughout North Georgia. He recently traveled to the George Disney Trail . This steep trail is the most challenging trail in northwest Georgia, and the most challenging short trail in the state. Randy traversed this 2.1 mile climb to check on the damaged remains of George Disney’s grave. Randy reported the damage to the police department and working with Steve Hall to get the marker restored. Randy participated in the 1890’s Days festival, the Dalton Civil War Show and Sale and the Tunnel hill Reenactment representing his camp. For his efforts he has earned the prestigious HOLD THE LINE award presented by the Mechanized Cavalry. Randy’s hard work and dedication to the cause is the reason why we have featured him in our member spotlight. 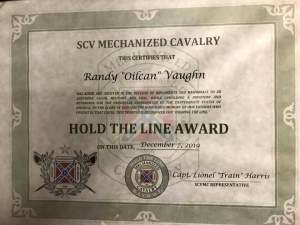