It’s February 24th, 1864, General Johnston is using soldiers from the Kentucky Orphan Brigade as a human telegraph line. This line stretched from the top of the ridge to the valley below giving them full view of the enemy. These men had to rest at their posts. An Englishman, by the name of George Disney rose early this morning and may have attempted to yawn when a bullet passed through his head. His fellow soldiers saw him lay back down and not aware he was killed til about an hour later when they tried to arouse him from his sleep. George Disney was a resident of Owensboro Kentucky and he enlisted in the First Kentucky Infantry. He served the first year in Virginia until the unit was disbanded. Later he became a member of the Fourth Kentucky Infantry that was part of the Orphan Brigade. He served in Vicksburg, Baton Rouge, Stone River, Jackson, Chickamauga and Mission Ridge. He was killed between Dalton and Tunnel Hill to become a casualty at Rocky Face and was buried where he fell.
Years go by and a lone grave located some three miles above Dalton at one of the highest points of Rocky Face, George Disney rests peacefully. He is mentioned in the Dalton Citizen on March 13, 1873. A poplar head board bears his name and unit. It is plainly marked. The entrenchments are well preserved and visible to any passerby. In March of 1912 a local Dalton Troop of Boy Scouts place an order for a marble head stone. It was noted the grave occupies a picturesque position on the south spur of the gap. The scout leader W.M Sapp procured horses and about a dozen scouts headed to the site. The original wooden marker said he was in the 10th Kentucky and the new marble marker corrected that.
On May 16, 1912 the Dalton Citizen reported the tribute ceremony for the new marker. By Horseback Scoutmaster Sapp and 25 Boy Scouts went to the site accompanied by Miss Amanda Ware of Kentucky as a state sponsor and Miss Marie Hamilton and Miss Hattie Springfield. Also in attendance was Jay Wood, Henry Quinn, Sim Hassler and William Glaze. The grave was hollowed out and the cavity was filled with concrete. The marker was placed in and the concrete allowed to harden. The ceremony began with an invocation, the song, ”America”, a short talk by Scout Master Sapp, the song, “Columbia:, a bugle call with “Taps” and the ceremony ended. The article goes on to say this memorial will stand for all time. The marker itself was also monogramed with D.B.S for the Dalton Boy Scouts. And said the following.

In 1954 the Georgia State Historical Commission installs a marker on Hwy 41 at Mill Creek Gap stating; “GEORGE DISNEY’S GRAVE, High up on Rocky Face, S. of gap, is the lone grave of English-born George Disney, Co. K., 4th Ky. Inft., Lewis’ “Orphan Brigade”, Bate’s div., Hindman’s Corps [CSA]. The 4th Ky. was deployed to form a living telegraph line from base to summit of the ridge at the point where the view commanded Federal movements in open valley N.W. Disney, atop the ridge, was killed by a random bullet, Feb. 25, 1864; he was buried where he fell. Dalton Boy Scouts, on a hike, found the grave, & directed by Scout Master Wm. M. Sapp, Sr., replaced the inscribed heart-pine board with a marble marker, May 13, 1912.” In the late 1990s, the George Disney Trail is erected. This steep trail is the most challenging trail in northwest Georgia, and the most challenging short trail in the state.
We fast forward to today. Recently Mike Aaron with the McDaniel Curtis Camp reported a friend Frank Hanson was hiking on the Disney Trail last Saturday October 12 and found the tombstone had been demolished. He reported his findings to Tony Pilgrim who in turn shared with the Georgia Monument Guards. Randy Vaughn and B J Dawson traveled to the scene on October 17 to survey the damage despite the difficult and arduous hike. Randy Vaughn reports Lt. A. Lowery said the Whitfield County Public Works Department are the ones that maintain the trail. B. J. Dawson returned to the site and recovered the remains of Disney’s marker only to find bits and pieces tossed about. He could not find all of the remains so another marker will have to be installed. Remember for all involved this is a 2.4 mile long trail straight up. The remaining pieces could not be found.
Through teamwork and determination the marker will be replaced. Compatriot Steve Hall is looking to order a granite marker from the VA. The Dalton Civil War Round table and Whitfield County are aware. Wendell Bruce, First Brigade Commander, has been made aware. Searching for alternate methods to get to the site will be needed, as the hike there is bad enough without the weight of a 230 pound marker and materials to set the stone. The task will be daunting. We will need all the help we can get. The vandals will stop at nothing to keep destroying things. We need to replace everything they destroy. They must leave our treasured veterans alone. 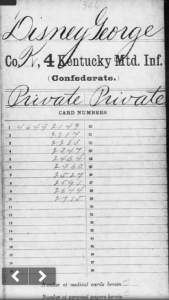