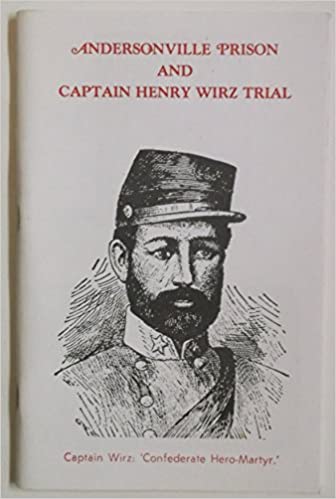 The annual Capt. Henry Wirz Memorial Service will be held in the town of Andersonville, GA on Sunday afternoon, November 8, 2020 at 3:00 p.m.  The public is invited to attend.  The event is sponsored by the Alexander H. Stephens SCV Camp 78 in Americus, Ga.  In case of inclement weather, the Service will be held down the street from the Capt. Wirz Monument in the Andersonville Village Hall.

The Muckalee Guards from Camp 78 will serve as the Honor Guard, and Mr. Robert Coleman’s Artillery Unit will perform at the closing of the ceremony.

We want to invite all the SCV Compatriots in Georgia and surrounding states to attend our 45th annual Capt. Henry Wirz Memorial Service to be held in Andersonville, GA.  SCV members, along with MOSB and UDC members throughout several states have been very supportive of our annual Memorial Service in the past, and we appreciate that.

At an SCV National Convention in Dallas, Texas some years ago, Capt. Wirz was declared a Confederate Hero-Martyr.

After the War for Southern Independence, Capt. Wirz was carried to Washington, D C for a trial before a Military Tribunal of Yankees.  In a trial that many historians have declared a national disgrace, Capt. Wirz was found guilty of murdering 13 prisoners at Andersonville Prison Camp.  Of the 13 prisoners, not a single name was ever given, nor was a single body ever produced.  He was hung in Washington on November 10, 1865.

After the hanging, the Yankees cut of Capt. Wirz’ head, arms, and legs, and exhibited them about the country.  After four years, his attorney was able to get a few bones back to have a funeral at Mount Olivet Cemetery in Washington.  In 2020 there are still some of his bones on public exhibit at a museum in Maryland.

For more information about the Memorial Service, please contact Capt. Wirz Service Chairman James Gaston at gaston7460@bellsouth.net or by phone or text at 229-938-9115.