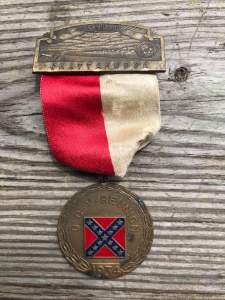 It was June of 1934 when over 1600 Confederate veterans attended the 44th United Confederate Veterans Reunion in Chattanooga Tennessee and arriving from as far away as California. This three day event went from June 6th through June 8th ending with a grand parade. This event was predicted to be the last United Confederate Veterans Reunion even though two other states Texas and Florida volunteered to sponsor another. Quarter Master General Charles De Saussaure of Memphis, Tennessee had this to say, “As long as there are two Confederate Veterans alive, we will meet in annual reunion. In our hearts there remains the yearning to get together.” At this reunion General Rice A. Pierce of Tennessee was elected Commander and Chief of the UCV Succeeding General Homer Atkinson of Virginia. The event was hosted by many groups like the United Daughters of the Confederacy and the Southern Memorial Association but one particular group’s logo was stamped upon the reunion medal this year was the American Legion.

The American Legion was chartered by Congress in 1919 as a patriotic veteran’s organization. Focusing on service to veterans, service members and communities, the Legion evolved from a group of war-weary veterans of World War I into one of the most influential nonprofit groups in the United States. The Confederate veteran Magazine in 1919 Volume 27 recorded among the first greetings by the American Legion was given to General K. M Vanzandt commanding the United Confederate Veterans and they participated in the 29th UCV Reunion. Henry D Lindsey Chairman of the American Legion said.” The Members of the American Legion are sons of those who wore the blue and those who wore the gray, and in the baptism of fire and blood through which we have passed in the world war example of valor set before us in the older war made us strive to be more worthily represent our country.” Some of the same sentiment was sent to President Woodrow Wilson by the Adjutant General of the UCV, William E Mickle of Atlanta.

At this particular reunion, Edward A. Hayes, National Commander of the American Legion, addressed the attendees. Hayes said, “A movement among American university students to resist army service in time of war is a disease spreading to destroy the principals of freedom and democracy upon which our nation was founded. We of the American Legion believe that it is time that the American people take a decided stand against some of the strange tenets that are finding foothold.” His warning could very well be applied today. As veterans monuments and the reminders of the past are slowly being destroyed. Most of this sentiment comes straight from locations like the University of North Carolina and the destruction of Silent Sam.

This story is brought to you today through the work of Adjutant Randy Vaughn and the State of Dade Camp #707, who found the 1934 UCV reunion medal. Freddie Parris has the medal and has invited friends from the American Legion Post #95 in East Ridge to join the SCV. The medal will be on display at the American Legion Post #95 in East Ridge. The goal is to work together with other veterans groups in a spirit of the valor set before by the veterans of the past. We look forward to working together with other veterans organizations. 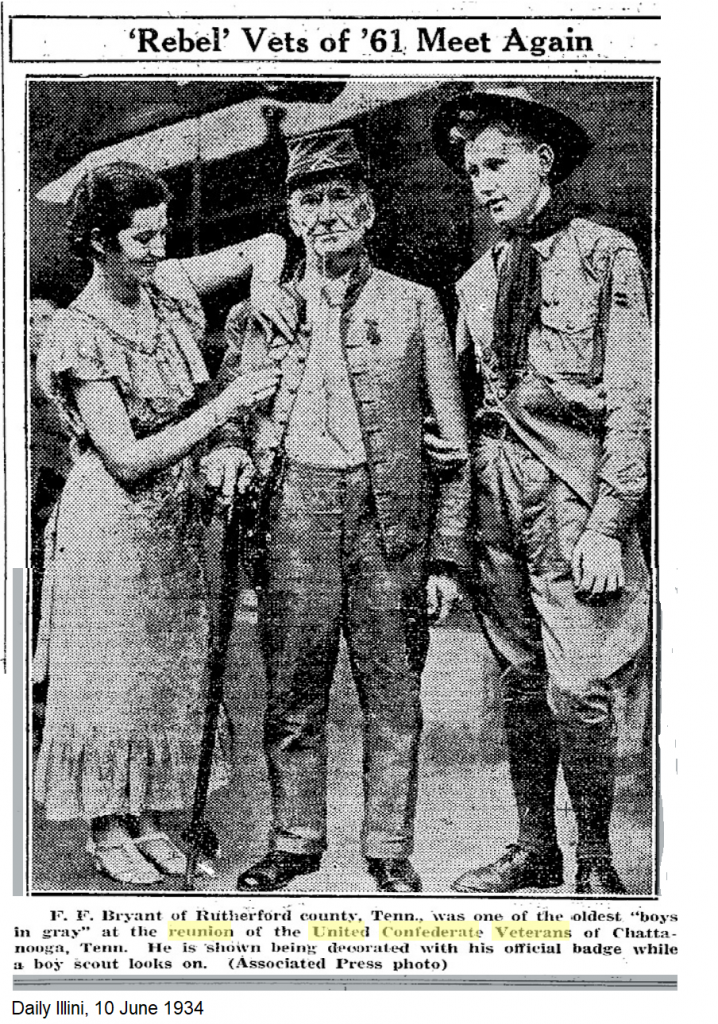 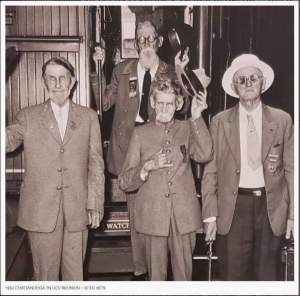 Veterans at the Annual Reunion in Chattanooga, Tennessee in 1834 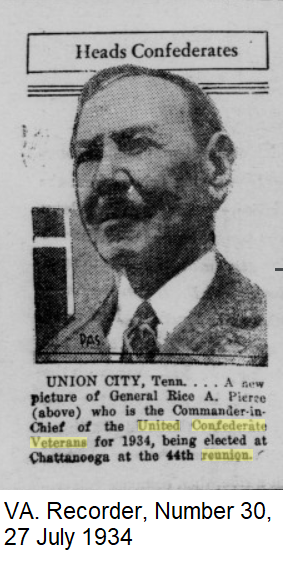 in 1934, General Rice A. Pierce of Tennessee was elected Commander and Chief of the UCV Succeeding General Homer Atkinson of Virginia.